In August I took over a project that Esther Arnold, a recent PhD recipient in the English Department, had started. The project is an illustrated manuscript of the King James translation of the book of Genesis. This manuscript was probably started in the last year of Blake’s life and left unfinished upon his death.

The manuscript has offered some new challenges in terms of transcription. One of these issues is Blake’s use of ruled lines in his manuscripts and the challenge they pose to our “transcribe what you see” rule. Blake first drew evenly spaced ruled lines on the manuscript pages before beginning his writing. These lines appear to be in light pencil as a guide for the text from Genesis that Blake was transcribing. In the first two objects – presumably the most finished of the work – these lines have been erased and the text itself is illuminated in red and green, as well as highlighted in gold. The assumption being that had Blake finished all of the lines would have been erased.

Given the unfinished state of the manuscript, however, in later objects these lines have not been erased. In some places these lines bisect or lie above (rather than below) the Genesis text. There are also several places where Blake has retraced the lines a bit sloppily, which gives the impression of a double or triple line.

One way of transcribing the lines would look like this: 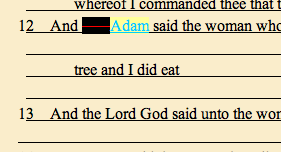 This transcription makes it seem as if there is empty space in the manuscript where there actually is none. It is not really what one sees in the object itself if we are adhering the “transcribe what you see” rule.

The alternative would be to simply transcribe the ruled lines as if they were not doubled. This is a problem that we have discussed in the weekly BAND meeting, but on which we were unable to make a determination. As a result, all the editors, as well as the UNC team, will be consulted via the email list in order so that they can weigh in on a final decision. The decision made in Genesis might very well impact later manuscripts and needs to be carefully weighed.

Uncategorized
So then what happened?
BAND, Uncategorized
Working with Vertical Text
BAND, XML
Once More Unto the Breach, Dear Friends