The Line Problem 2: A Descriptive Catalogue

Connected to Lisa’s post about transcribing Genesis, lines in typographical works like A Descriptive Catalogue are also raising questions. Here, ruled lines are used as a decorative element, as in this example from the title where a double line appears below Blake’s handwritten addition.

In line with (haha!) our policy of “transcribe what you see,” I created a transcription that displays like this: 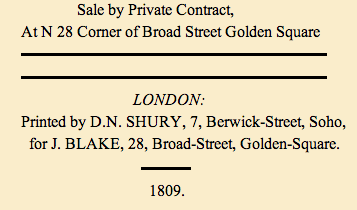 However, this issue was discussed over the summer when the Editors were trying to decide whether or not to number ruled lines in our transcriptions. Deciding not to, Rachel suggested that “we put one bold line instead of a multiple line and then include a note explaining what’s there.”

I like this suggestion because I think that transcribing the multiple lines changes the overall spacing on the page and in both of these cases, I would argue that we should treat it as a single line, and the double/triple rule is just a decorative feature. Similarly, they are not necessarily lines by Blake, which makes leaving off the line number make sense too.

So my questions are: